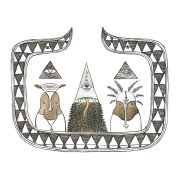 Just found a limited number of the Lair Of The Glowing Bantling LPs. Nab them here!

Recorded at Cracks in the Light Studios, Cork in March 2014 by Cathal MacGabhann, with special assistance by Patrick Cullen.

Also appearning on this song is David Colohan (drones and vibes) and Jorge Boehringer (viola).

All songs written by Woven Skull, except ‘Blind Willy’ which was written by Sonny Sharrock.

“the band recall the ramshackle anthems of Exuma and the spirited improv of Six Organs of Admittance, suggesting that without furious discipline they can make very beautiful sounds. It’s within them to make pretty music, but for the most part ‘Lair Of The Glowing Bantling’ sounds like it’s shaking itself from nightmare to existence” Norman Records (8/10)